Interview About Sound Effects and Music For Video Games

Interview with Indiegamepod.com About Sound Effects and Music For Video Games

INTERVIEWER: Can you talk about, can you give game developers an idea of the importance of sound and sound design for the games? I mean, it’s something that usually they neglect.

Barry: Yeah. Well, it’s hugely important. We did a talk about this on Monday and that when you have really bad voiceover and music and sound, it’s really distracting from the game play.

INTERVIEWER: Are a lot of the players just turning off the sound anyways because they’re playing a game while they’re doing other things?

Barry: It’s possible. I don’t know. I don’t have access to that usability data, I guess, but I think from my perspective one of the most compelling things about the games I have played a lot are that I thought the sound design and music was really excellent. I still remember, I think, the first Unreal Tournament that was released. The guy that did the sound design did a really fabulous job because every sound had a great character to it.

So, when the flag cannon is being pumped, the hair on the back of your neck goes up because oh, I’m about to get destroyed. If I can hear the sound somewhere in the environment, I don’t know where it’s coming from but I can hear it and it makes you react to the game in a completely different way than if you were just playing a record in the back.

We try and make really engaging sounds. To use the cinematic analogy, the first Star Wars movie was very notorious for having really fabulous sounds, like, everybody knows what a light saber sound is. And that sound really identified a lot of things in that movie to the film goer and it stuck with people for a lot of years.

It’s no different in games. When you have really great music and sound, and from a music standpoint, things are getting more and more cinematic in games. So, there isn’t any reason why you shouldn’t have, like, in a console game you have a front end theme, and then you have that same theme reharmonized down across other levels and mini games of combat areas of the game.

That is very similar to the way you would approach film where you have cinematical content and then it gets reused or identified with the character who uses the motif or whatever. The same thing is happening in games. I think that really gives the user something to remember the game by.

INTERVIEWER: Yeah. Would you say that there’s anything as identifiable as the light saber, any game that’s created that level of identifiability or no, not yet, like maybe, it’s still…?

Barry: Well, there’s some stuff out there. I think there’s so much variety in games that it’s hard to pinpoint any one example, but the example I just gave, for me personally Unreal Tournament, there were some great sounds in there I still remember them to this day. There’s certain sound effects that all of us sound designers know about that were used on that game.

If there’s a wind loop in the front end, we know exactly what library that came from and which sound it was. It’s kind of fun to geek out on that stuff and try and identify where it came from. But, the film stuff because it reaches such a wide audience and there’s not, obviously, films, it’s more of a linear thing. It is what it is. It’s easier to identify that stuff. And using that example, the guy that did the sound design for that film is notorious for going out and doing really creative things to build the sounds for that movie.

INTERVIEWER: That’s a good question. Is that even a really bad thing to actually replay the same sound over and over again? You said in your sound library you have, like, many different variations of the same option. Is that a technique that developers should use to actually make it more interesting?

Barry: Yeah, definitely because, like, these days if you use the same story line over and over and over and over, it gets really repetitive. So, one of the things you have to do from an implementation standpoint is you have to have multiple variations of that sound. So, it sounds like the same sound, but it’s been altered timing-wise and pitch-wise and it’s just the little slight adjustments that are made across different variations really make it come to life.

So, you can have five sword clangs that all kind of sound the same, but each and every one is slightly different. So, it just sounds more realistic.

In order for us to build that, we’d have to have a lot of source that was all ready, all recorded in the same place. So, the continuity’s the same amongst all the sounds. So, we had the lion roar for us 20 times, and we’ll take those 20 roars and each and every one of them sounds a little different. So, you can take three of those and use those as an attacking monster sound or whatever.

INTERVIEWER: Are there any other best sound design practices that you would recommend for game developers out there?

Barry: Yeah. I think probably if you have the time and the budget building stuff from the ground up is a really great way to go because sometimes, and this is a little bit of irony with our site, it’s hard to find stuff in libraries that will work for games. But, you can always get stuff to work for your games if you go out and record it yourself.

I think a really great example of that are racing and flight simulator games where if you have the sound of an old World War II aircraft, it’s hard to find, you cannot find in any other libraries a real World War II aircraft engine loop that loops correctly and replicates the different sounds, the RPM levels of an engine. So, you have to actually go out and find that plane, record it, record the pilot spinning it up at different RPM levels. And then, you take all your material and cut it into a format that’s good for games.

Sometimes, it just makes the game sound better when you have all your original source, and sometimes you don’t have any choice but to go out and record it yourself because of the demands of the material in the game. And, like, racing games are the same way. It’s hard to find cars and race cars with engines looping correctly, so you have to go out and find the cars and record them yourself, knowing what’s going to happen with the sounds later on in the game.

If you know you’re going to have to have five different engine loops of this particular car, you have to go out and record it for the car and know that you’re going to have to pull five loops out of it. So, you better make sure that whoever’s stepping on the accelerator holds it steady so it’s not wavering around because once you go back and loop it, it will be nearly impossible to loop it without hearing the other engines wavering back and forth. It’s a lot of work.

INTERVIEWER: I looked at your customer list. You have a lot of customers that are outside of gaming. So, even if people aren’t going to use it for their video game, can you talk about other applications of your sound effects, whether they’re for websites or flash simulations?

Barry: Yeah. We do tons of stuff, like all the app developers are really into our library right now because everybody needs little sounds and alerts and stuff for their applications. So, we do a lot of licensing for that.

Barry: iPhone apps, a lot of web interfaces, some hardware. We do license out if somebody is making a digital interface for their printer or something and need UI interface. UI is user interface sound or button sound. They need the sounds for their interface, so they license it from us. We do a lot of independent film. A lot of broadcasters use our stuff as well, so it’s not just built for games.

We start with broadcast level stuff and then conform it for games. We found a lot of interactive agencies doing, maybe, they’re building a web banner that’s got an animation in it and it needs some sounds. That often acts under the same limitations that game audio does. So, they’ll license stuff out of the library because they need a quick little button click or like a reveal sound or they need a short clip of music to play under it.

INTERVIEWER: And where can people find out more information then and actually, just start listening to sounds and see if they’re appropriate and start buying them?

INTERVIEWER: Thank you very much! 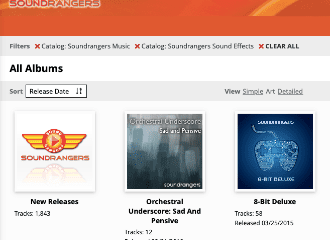 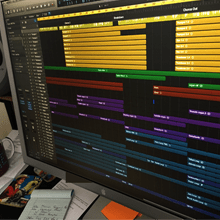 Soundrangers is pleased to announce that we’ve partnered with Firelight Technologies to bring our library of sound effects downloads to FMOD.io. This onboard sound library integrates high quality video game sounds into mobile and AAA Read more…